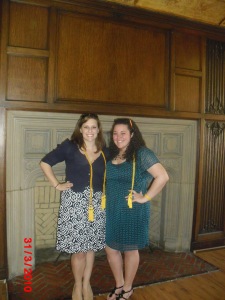 Niki & I at Honors Convocation this past spring

I am probably one of the few people who isn’t directly writing about the election today. I have a more important story to tell. Though, the message I am sharing with you might actually have some relevance in regards to the election.

Four years ago, two overly ambitious freshmen sat in one of their first lectures at Temple University. Both girls were eager to succeed, leave their mark on Temple’s campus. Both did well in the class, participated often and indirectly marked the other as competition. Little did they know what the future had in store for them.

Four years ago, Niki and I were the definition of friendemies. We would say hi to one another, like Facebook statuses and even offer advice on specific classes to take. But we both saw each other as competition. For the first two years of college, this is how we operated. I will be the first to admit I was threatened by Niki; I saw how talented and passionate she was and knew immediately she was going to be one of the top students in our program. It’s also safe to say our personalities in the classroom were a bit different. To this day, Niki openly admits she hated how I was a bit of a suck-up in our Intro to PR class. Sorry Niki!

In the spring of junior year, I joined PRowl Public Relations, mostly thanks to Niki and another mutual friend. Niki promised it would be worth it and that she’d look out for me. We worked together a lot during my first few months with PRowl. I slowly began to realize that us working together would be more powerful and productive than competing with each other. With Niki’s guidance, I became an Account Executive for PRowl and throughout our senior year, our once friendemie relationship turned into a mostly healthy professional one.

During our senior year, Niki and I spent countless days and nights together working, but also developing a friendship. Along with our other friend Lauren, we became an unstoppable trio, accomplishing every goal we set and having other students, professors and professionals admire our work ethic. Niki was there to fight for me, cheer me on and be a shoulder to lean on whenever I needed it. For that, there’s no way I could ever thank her enough.

As young college students, we both wanted to be the best and would have done anything to get there. Four years later, after many disagreements, sleepless nights and vent sessions, we realize we are the best when we unite forces. Of course, we have our arguments and often see things differently. But that’s the beauty of it, we both offer different perspectives and get to share our insights with one another. It makes for a much richer picture of the world.

I hope the story of my friendship with Niki shows you that your competition can become your ally or even your friend. People with different opinions can work together to achieve a common goal. Hopefully, that’s what we will see from President Obama and the members of Congress during the next four years. Two brains are always better than one!

“I’ve heard it said that people come into our lives for a reason, bringing something we must learn. And we are lead to those who help us most to grow, if we let them and we help them in return. Well, I don’t know if I believe that’s true. But I know I’m who I am today because I knew you. Because I knew you, I have been changed for good” – Wicked