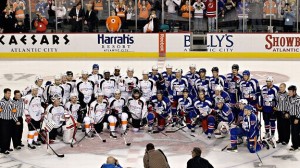 On Saturday night, I traveled to Atlantic City with my family to watch Operation Hat Trick, a charity hockey game created in order to raise money for the victims of Hurricane Sandy. Hockey all-stars Scott Hartnell from the Philadelphia Flyers and Brad Richards from the New York Rangers teamed up with Caesar’s Atlantic City to sponsor the event held at the Boardwalk Convention Center. The proceeds raised from the event were donated to the Empire State Relief Fund, the New Jersey Hurricane Relief Fund and the American Red Cross.

Hartnell and Richards were the captains of each team that featured players from the New York Rangers, New Jersey Devils, Philadelphia Flyers, Washington Capitals, Colorado Avalanche among many others. The sellout crowd of over 10,000 watched goalies Martin Brodeur and Henrik Lundqvist battle for the first time all hockey season. Lundqvist had 57 saves with his team winning 10 to 6. The event showcased several talented NHL players who put their rivalries aside to raise money for an important cause.

While the main and most important goal of the event was to raise money for Hurricane Sandy victims, Operation Hat Trick generated conversation about the NHL. Currently, the NHL is in a lockout because players and owners cannot reach an agreement over salaries. On Saturday night, there were hundreds of tweets about the charity game. Teams tweeted live updates about their players and game attendees sent pictures and videos to Twitter. Fans generated positive dialogues about the event that hopefully captured the attention of players and NHL officials. There was even a “We Want Hockey” chant started throughout the arena during the game.

Operation Hat Trick had both positive and negative public relations implications. On one hand, the event showed how the game of hockey can be used to raise money for a good cause. It gave hockey superstars an opportunity to give back while playing a sport they love. On the other hand, holding such an event reminded hockey fans everywhere of what they are missing. The game could be seen as a catalyst that sparked angry fans to voice their opinions and possibly boycott the sport if and when it does return. There is a rumor circulating saying that the NHL told NBC not to broadcast the game. We will see if that holds true.

It was both amazing and inspiring to see the NHL players put aside their differences and play for a good cause. If players could put aside such rivalries, I wonder why they can reach a mutual agreement in order to have a NHL season. Based off of the tweets from this weekend, hockey fans are dying for their sport to come back. Hopefully, they can settle this dispute soon so we can have somewhat of a hockey season.