For the last two months, I have been working for Sansone Toyota as their Delivery Coordinator. In short, I take people to their car after its purchased and show them how to work everything from their Bluetooth to their windshield wipers. It has been a great job, a distraction and a paycheck. But, now I’m ready to move on and give my two weeks notice. To say I felt and probably looked like a deer in headlights was an understatement.

Before I even thought about resigning, I made sure my job at PwC was definite. I had an offer letter, all my 401K and insurance information as well as a start date. With all of those pieces to the PwC puzzle, I felt confident it was time to give my two weeks notice. I had never resigned from a job before so this was completely new territory. Based off of this experience, I came up with a few tips that helped me resign with grace.

1). Have a Plan: Before I went into work on that faithful Monday, I practiced what I was going to say and how I was going to say it. I also thought about the best time to speak with my boss; earlier in the day would work better than later at night.

2). Be Concise: When I did sit down with my boss, I kept my little speech short and to the point. I tried not to hesitate and avoided words like um and like. By doing this, it showed I was comfortable and confident in my decision.

3). Don’t Burn Bridges: I explained to my boss that I wasn’t leaving because of anyone at Toyota. It was just time for me to move on and focus on my career. I also thanked him for the opportunity and said I was glad to have worked for him. In turn, he said I could use him as a reference and that he wanted to stay in touch. It’s important not to burn bridges since you never know when a previous boss or co-worker might come in handy.

4). Think About What You Learned: When I first started at Toyota, I thought the job was pointless and was pretty miserable. Now, I realize that I’ve learned a lot during the last two months. I’ve improved my customer service skills and developed more patience. I’ve also been working with solely men, which is completely different from working with women. I have realized these differences and changed my communication style based on them. All of these skills will be valuable at any job I have in the future.

When I did actually resign, my boss was super supportive and respected my decision. I am very grateful for my experience at Toyota. I’ve met some awesome people and cultivated different skills. Now it’s time to move on to the next phase of my life.

Motivation Mondays: The Show Must Go On

On Friday, I wrote about Hurricane Sandy and the crisis communication lessons learned from the super storm. On this Motivation Monday, I’d like to use my blog post to think about the next step: moving forward.

It’s hard believe a mere week ago everything was normal. Houses stood, people filled the streets and we thought we were prepared. Today, life is completely different. Places like the Jersey Shore and Staten Island will never be the same. So many have lost everything and are now homeless. The pictures are devastating and the stories make you shake your head in disbelief. Of course, the biggest question now is what’s next?

If you’re anything like me, you feel guilty going back to your normal routine, wishing you could be doing more. However, starting to get things back to normal is one of the best things people can do. By going to work or school, we are showing that this storm did not beat us; that we are starting to rebuild our lives. Slowly, lives are returning to normal with electricity being restored, roads reopening and public transportation restarting service.

For many, life as they know it will never be the same. Yesterday, I spent the day in Staten Island, a place where both my parents grew up. I still have many family members on the island too. Houses are gone with families’ belongings in the streets. Yet, people were so grateful for such simple things like garbage bags or bottled water. It was truly the most humbling experience of my life.

It is certainly hard to move on and not think about everything that has happened, especially when so many are still in clean-up mode. But trying to return things to a state of normalcy will benefit everyone. If nothing else, we all should be grateful that we still have jobs and schools to go to. This great tragedy should remind everyone how precious life really is.

I urge everyone to make a donation or go volunteer. There are several places in New Jersey and New York that need manpower, among other things. For more specific ways to help the Hurricane Sandy relief efforts, click here. 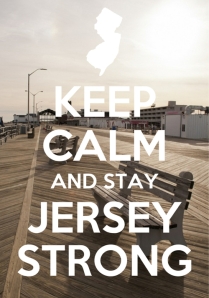